The dancing pot at Ninnaji temple, from the series Sketches by Yoshitoshi (Yoshitoshi Ryakuga) 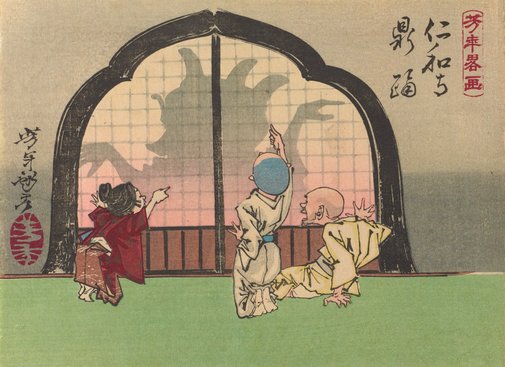 Sketches by Yoshitoshi (Yoshitoshi Ryakuga) is a humorous series of small woodblock prints designed by Tsukioka Yoshitoshi, one of Japan’s greatest print designers, and issued in pairs. The prints were inspired by Japanese folklore and stories from kabuki theatre. The impression of children and an older man watching a monstrous looming shadow through a paper screen is known as The dancing pot at Ninnaji temple, or The cauldron dance. Set in a Kyoto temple, it is based on a story by Yoshida Kenko (1283–1350) of a night of revelry during which an inebriated monk put a three-legged bronze pot on his head and danced around happily until he realised it was stuck. He was later released from the pot, but at the expense of his nose and ears.

Children being scared by shadows in the shoji