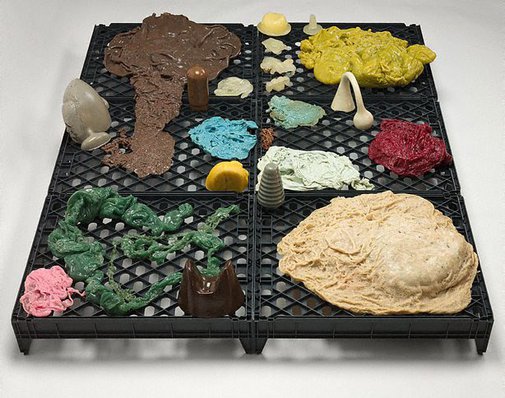 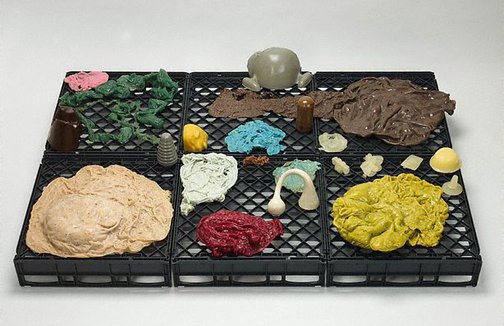 Hany Armanious finds a hidden life that seems to lurk within the things that surround us, whereby a latent art just needs to be coaxed to the surface through the intervention of the artist. In his sculptures there is a multiplying proliferation of objects and forms – whether familiar, common or used materials that suggest a particular association, or objects he has cast and created – balanced with an attention to aesthetic considerations. Armanious often creates his work through a form of semi-automatism, where he responds to the images and shapes that certain materials suggest to him, or through associations he traces between objects, words and images. This can occur in large-scale installations such as ‘Selfok’ 1994–2001, a complex assemblage of found and made items inspired initially by Elf Shelf kit shelving, or in more modest works such as his wall rubbing series in which sheets of black sandpaper clogged with paint dust resemble photographs or paintings of starry night skies.

‘Snake oil’ is from a series of works created from ‘hotmelt’, a commercially produced synthetic latex, which Armanious found for sale in a shop near his studio during a residency in Los Angeles in 1993. Initially Armanious experimented with pouring this substance into the spaces of things, casting objects from the empty space in everyday items: ‘Untitled snake oil’ 1997, which won the Moët & Chandon Art Fellowship in 1998, comprised casts of the interiors of wine glasses, displayed on the inverted glasses.

Armanious also discovered that when hotmelt was poured into water, it sets instantly into ‘casts’ of the interaction between the cooling water and hot matter. The resulting technicolour blobs are fascinatingly visceral, simultaneously compelling, funny and repulsive. Some forms are like alien jellyfish and others like entrails, some are quite scatological, but in all of them the material oozes with meaning. ‘Snake oil’ is comprised mainly of poured shapes but with some cast components as well, presented on found plastic bread trays as a sculptural base. The title ‘Snake oil’ refers to the common use of this term as the promise of a panacea for all ills which is inevitably found to be false. Armanious seems to refer to a common expectation that art will offer a transformative experience when usually what you see is what you get, plus of course a whole new world that may always have been there but which Armanious has opened our eyes to.

‘Turns in Arabba’ 2005 (AGNSW collection) began with Armanious transposing songs by the Swedish pop group Abba to Arabic instrumentation. As Armanious was born in Egypt but grew up in Australia in the 1970s this is not such an unexpected frame of reference. Armanious moved from this to considering and replicating objects that recalled both Middle Eastern forms and modernist Scandinavian design. In the resulting sculpture, the properties and associations of objects which are ‘turned’ and have a central axis become the focus of experimentation.

Browse other works by Hany Armanious