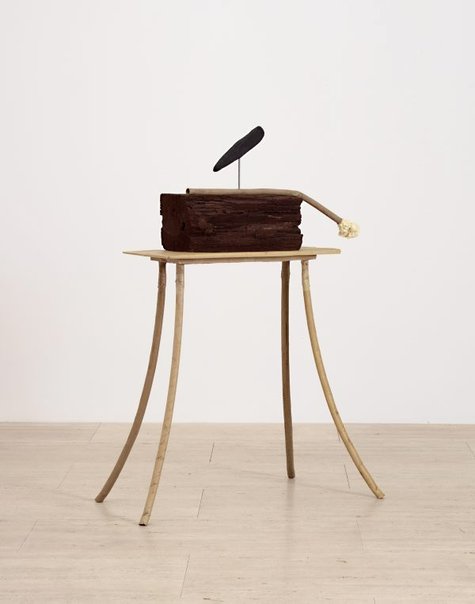 Hany Armanious is an Egyptian/Australian multidisciplinary artist associated with the Sydney grunge art movement of the early to mid 1990s. Armanious' sculptural practice is defined by a surrealist-like fascination with the materials and meanings of mass produced and found objects. His work plays with and expands upon the viewer's association with recognisable forms - by experimenting with moulding and casting techniques. This process opens semiological and metaphysical propositions for the artist, which are reflected in his question: 'How can we make sense of a world where the sources of knowledge are increasingly de-centred and where the real and the virtual are as interchangeable as the components of a mould and cast?' (Armanious quoted in Jason Markou, 'Hany Armanious: turns' in Arabba, Michael Lett, Auckland, 2005).

Armanious' enigmatic 'Sphinx' 2009 unites the mythic and mundane in a disparate assemblage constructed from three seemingly everyday components, which are surrogates for the head, tale and torso of the fictitious creature. Although the materials have a natural appearance, they have in fact been shaped and set in artificial mediums making the familiar instantly strange. Like Giacometti and Picasso before him, Armanious explores the potency of representing cultural icons. In ancient Grecian and Egyptian mythology the sphinx is a mischievous guardian of knowledge that would devour those travellers who failed to answer its riddle correctly. For Armanious the sphinx and its riddle is emblematic of the alchemical puzzle of creation.

Browse other works by Hany Armanious