One of my few city based landscapes, this print was created to celebrate the arrival in the southern hemisphere of Halley's Comet. Rather a disappointment in itself - dwarfed by the lights and activity of the city.

It was a different world in Sydney in 1986 - we were terrorism free and people took responsibility for their own actions. So it was possible for a friend who worked at the airport to arrange for me to lie down at the end of the runway to photograph the undercarraige of a jumbo jet as it screamed overhead.

screenprint on chalk coated Bristol board

Browse other works by Sally Robinson 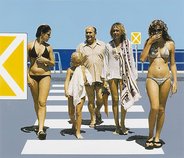