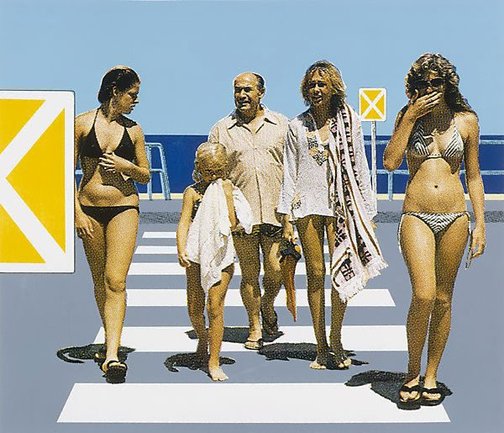 Sally Robinson was born in England and arrived in Australia with her family in 1960. From 1970-73 she studied at the National Art School, Sydney 1970-73 and began exhibiting in 1974. She worked as a designer at the Australian Museum, Sydney from 1974-83. She has taught at the College of Fine Arts, Sydney, and currently works as an artist and designer. She has exhibited in solo and group exhibitions since 1974. Her current work makes less references to popular culture, and utilises computer technology.

As a student, Robinson became interested in the application of photography to screenprinting. She made 'Beach crossing' while living at Bondi Beach; it is the result of her observations of everyday life in the area.

"If I smile at the world through my prints it is with affection, never with sarcasm. The images are uncomplicated observations of the world in which I live and work, either views of Australian life or typical Australian landscapes. For the most part the images are a montage of elements from several different photographs. Those that remain close to one original photo involve modification by elimination of irrelevant detail and inclusion of drawn elements for the sake of design...
Graphic techniques of tone drop out (posterization), halftone and colour separation are used to reduce the photographs to a printable form. The print is then produced by paper, glue and tusche stencils for the background colours, over-printed by photostencils."
(quoted in Robert Lindsay, 'On paper: Micky Allan, Mandy Martin, Sally Robinson, Jenny Watson', Melbourne: National Gallery of Victoria, 1980)

Browse other works by Sally Robinson