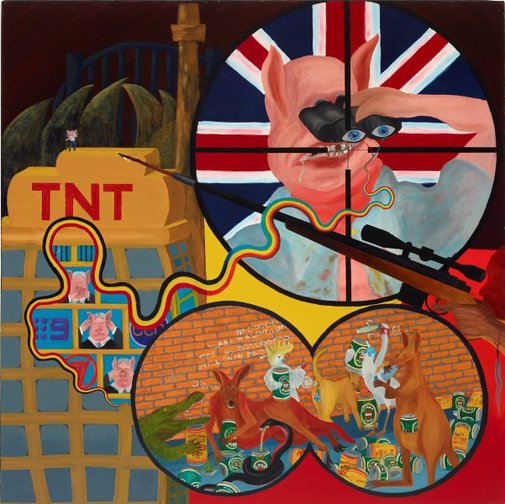 'Cognative frontier' 1995 comments on the Aboriginal community of Redfern, the looming presence of authority in the area and the moral panic created by the media in regard to apparent criminal activity. The work features the iconic TNT towers, which many thought were used by the police to closely monitor The Block. A policeman stands at the top of one of the towers keeping watch. He is then depicted in close up before the union jack, complete wth sparkling grin. Within his view are the native animals enjoying countless cans of VB beer. These native animals represent Indigenous people and Hookey is commenting on many of the stereotypes that are held about Indigenous people. Within the TNT tower the media ironically 'speak no evil', 'hear no evil' and 'see no evil'.

Gordon Hookey is a member of the Brisbane-based collective ProppaNOW, whose members also include Richard Bell, Tony Albert and Vernon Ah Kee. During the mid 1990s whilst studying at the Sydney College of Fine Arts he was a member of Boomalli Aboriginal Artist's co-operative.

Hookey's work combines figurative characters, iconic symbols, bold comic-like text and a spectrum of vibrant colours. Through this idiosyncratic visual language he has developed a unique and immediately recognisable style. Hookey locates his art at the interface where Aboriginal and non-Aboriginal cultures converge. He explicitly attacks the establishment and implicates our current political representatives.

Browse other works by Gordon Hookey