Xanthorrhoea takes over the suburban backyard 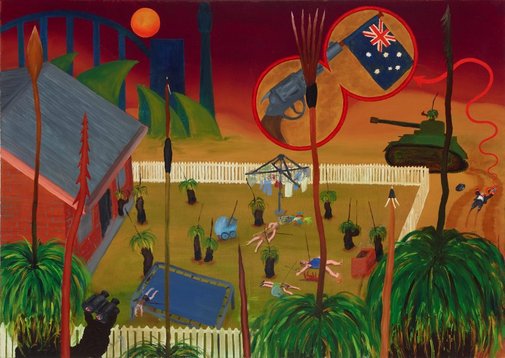 'Xanthorrhoea takes over the suburban backyard' 1995 is Hookey's response to the hysteria surrounding the issue of Native Title and the fear campaign that ignited widespread paranoia that private landholders were at risk of losing their property to Aboriginal people. This assumption was false and failed to recognise the restrictions and complexities of the title.

The works depicts the average quarter block, complete with trampoline and barbeque against the Sydney skyline with a setting sun. The red brick home is surrounded by a white picket fence that has been infiltrated by Xanthorrhoea shrubs, a native plant to Australia, formally known as black boys or spear grass. The plants in the foreground have indeed become spears. In the lower left corner a figure has the site under surveillance and views the Australian flag being fired from the gun in the top right. A Hills Hoist clothes line is situated in the centre of the backyard, a symbol of domesticity within the surrounding chaos.

Gordon Hookey is a member of the Brisbane-based collective ProppaNOW, whose members also include Richard Bell, Tony Albert and Vernon Ah Kee. During the mid 1990s whilst studying at the Sydney College of Fine Arts he was a member of Boomalli Aboriginal Artist's co-operative.

Hookey's work combines figurative characters, iconic symbols, bold comic-like text and a spectrum of vibrant colours. Through this idiosyncratic visual language he has developed a unique and immediately recognisable style. Hookey locates his art at the interface where Aboriginal and non-Aboriginal cultures converge. He explicitly attacks the establishment and implicates our current political representatives.

Browse other works by Gordon Hookey 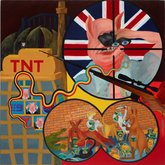