recto: Moreton Bay fig at Milton verso: Bamboos at the back of Samford and Note of houses 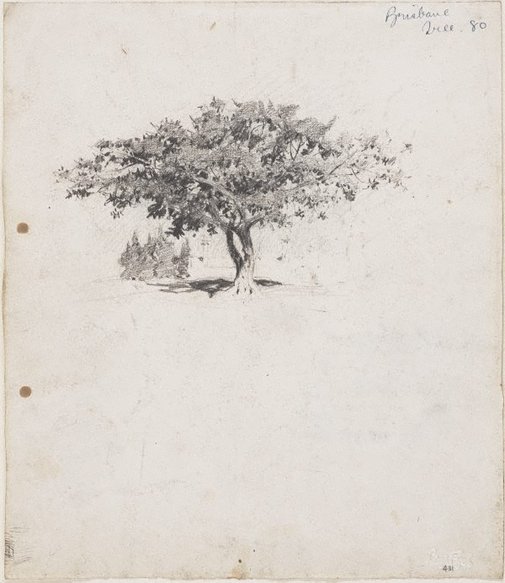 Lloyd Rees was born in Brisbane in 1895 and lived there until 1917, when he settled in Sydney. He attended Brisbane Technical College in 1910, where he had his first formal instruction in art and in 1913 took a job as a junior artist in the Queensland Printing Office. He began full time studies at the Brisbane Technical College from 1915 and was there until 1918 - many of the drawings in this gift were from his time at the school. Their subjects include everyday life out and about in Brisbane, landscape, architecture, portraits and studies after sculpture.

Rees' fparents' house called "Samford" was in Park Road, Milton; it was not far from their previous house 'Shirley'. They came to Sydney in 1922 and lived at Bondo where there was a piano as there always was in their previous homes.

Lloyd Rees
recto: Moreton Bay fig at Milton verso: Bamboos at the back of Samford and Note of houses