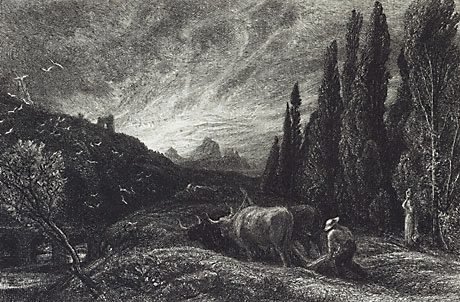 From 1826 to 1835 Palmer lived in Shoreham, Kent, where he was the central figure among a small circlre of William Blake followers known as the Ancients. It was not until 1850, however, that he made his first etching, producing 17 prints over the next three decades. These etchings recall the pantheistic view of nature and the visionary intensity of his Shoreham period.

The Early Ploughman belongs to the middle phase of Palmer's etching career (1858-61), when he was working in a larger landscape format. In harmony with the natural world, a ploughman tills the soil near a riverbank while another works in the distance. A nearby woman carries pitches of water. The brilliantly conceived early morning sky echoes the words Palmer wrote in a letter of 1876: "The charm of etching is the glimmering through of the white paper even in the shadows; so that almost everything either sparkles, or suggests sparkle ... those thousand little luminous eyes which peer through a finished linear etching".

In composing the scene, Palmer also made use of sketches from his honeymoon in Italy in 1839.

Browse other works by Samuel Palmer

Samuel PalmerLandscape with watermill circa 18559010