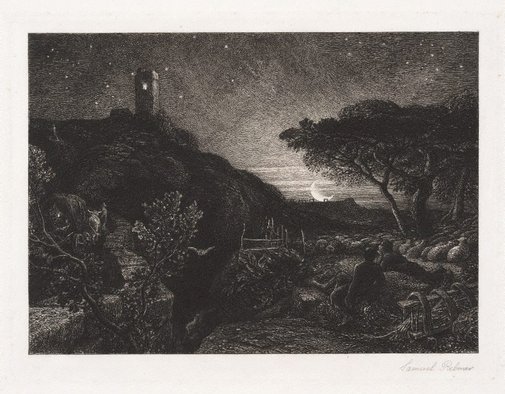 The most significant event in Palmer’s early life occurred in 1824 when the sensitive 19-year-old was introduced to William Blake, then in his 67th year. Palmer immediately recognised a kindred spirit, whose art spoke to Palmer’s own sense of the mysterious divinity of creation. Blake became the dominating inspiration for Palmer and his idealistic brotherhood of young artists, the ‘Ancients’, who lived by the motto ‘poetry and sentiment’.

Palmer was captivated with a series of wood engravings Blake had made to illustrate a school edition of the classical poet Virgil’s Eclogues. In these tiny prints – the most atypical of all Blake’s works – Palmer discovered:

… visions of little dells, and nooks, and corners of Paradise; models of the exquisitest pitch of intense poetry. I thought of their light and shade, and looking upon them I found no word to describe it … There is in all such a mystic and dreamy glimmer as penetrates and kindles the inmost soul, and gives complete and unreserved delight, unlike the gaudy daylight of this world.

Despite the powerful spell Blake cast over Palmer, the ironies and perversities of Blake’s art were fundamentally alien to him. Palmer’s imagery stressed an essentially benevolent view of humanity and nature; a response to the landscape invariably exhilarating and inspirational. Blake was a bleaker, less innocent artist than the socially reactionary and religiously orthodox Palmer could admit.

By the time Palmer turned to etching in 1850, at the age of 45, the demands of painting saleable pictures had diluted the intensity of religious and poetic insight that had once distinguished his work. Palmer’s adoption of etching was thus a self-conscious effort to rekindle the heightened perception of his early years, when he knew Blake and worked in idyllic seclusion with the Ancients at the village of Shoreham in Kent – the ‘valley of vision’ as he called it. The 13 etchings completed before his death in 1881 stand as a reaffirmation of Palmer’s unique imaginative powers, and can be seen as the direct progeny of the great Shoreham drawings of the 1820s and early 1830s.

Palmer was intrigued by the process of etching, remarking to the critic and publisher PG Hamerton in 1871: ‘If this kind of needlework could be made fairly remunerative, I should be content to do nothing else, so curiously attractive is the teazing, temper-trying, yet fascinating copper.’ The following year, again to Hamerton, Palmer opined: ‘the great peculiarity of etching … [is] an elegant mixture of the manual, chemical and calculative … it has something of the excitement of gambling, without its guilt and its ruin.’

Palmer elaborated his plates with painstaking care. Extensive use of stopping out and repeat biting helped achieve the dense hatchings and highly wrought surfaces that characterise his prints. ‘The charm of etching’, he wrote with evident delight in 1876, ‘is the glimmering through of the white paper even in the shadows; so that almost everything either sparkles, or suggests sparkle … those thousand little luminous eyes which peer through a finished linear etching’.

Palmer’s greatest etching, The lonely tower, with its wondrous sky lit by the low sickle moon and glistening with the Great Bear constellation, was inspired by lines from John Milton’s poem Il Penseroso (1645):

Or let my lamp at midnight hour
Be seen in some high lonely tow’r,
Where I may oft outwatch the Bear,
With thrice great Hermes, or unsphere
The spirit of Plato to unfold
What worlds or what vast regions hold
The immortal mind that hath forsook
Her mansion in this fleshly nook

Palmer revered the great poet from an early age, and admitted that the two items he carried with him in his pocket at all times were a sketchbook and a ‘little bound Milton’.

This etching originated in a large watercolour of 1867–68 commissioned by Leonard Rowe Valpy. Valpy had asked Palmer to paint subjects of his own choice, which spoke to his ‘inner sympathies’. The result was a series of eight water- colours illustrating lines from Milton’s companion poems, L’Allegro and Il Penseroso, expressions, respectively, of the pleasurable, active life and the solitary, pensive one. Palmer wrote to Valpy of his intentions for The lonely tower:

We must reach poetic loneliness – not the loneliness of the desert, but a secluded spot in a genial, pastoral country, enriched also by antique relics, such as those so-called Druidic stones. The constellation may help to indicate that the building is nothing else but the tower of Il Penseroso. Shepherds may gaze, not at the sky, but at the light given forth by My lamp at midnight hour.

The tower depicted in the etching stands on Leith Hill in Surrey. It was full of personal and tragic associations for Palmer since it was close to where his eldest son, Thomas More, died in 1861. The tower was also visible from the studio at Palmer’s house at Mead Vale, where he had relocated with his family the following year.

The watercolour is now in the Yale Center for British Art, New Haven. It differs from the etching most notably in the time of day depicted, which is sunset. A second, smaller watercolour, which corresponds more closely to the etching and was probably made after it, is in the Huntington Library, San Marino.

vi of 7 states. Published in an edition of 100 by H. Blair Ansdell in the series ‘Twenty-one etchings by the Etching Club’

Browse other works by Samuel Palmer

Samuel PalmerLandscape with watermill (circa 1855)9010