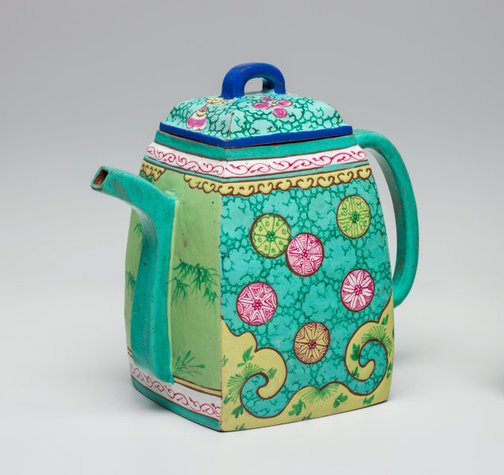 Yixing is a classical type of non-Imperial ware distinguished by its dense, fine-grained red body which is usually left unglazed. Produced in Jiangsu Province in Southern China since the 16th century, Yixing has been popular for a long time with both local and foreign markets.

Yixing potters have always specialized in the making of teapots, the use of which became widespread during the Ming dynasty as a result of making tea from rolled leaves rather than using it in the fine-ground, powdered form in which it had previously been supplied.

The shape of this particular wine pot is unique to Yixing. Invented in the early 18th century by a potter called Hua Fengxian, the shape was inspired by the Han bronze vessel called 'fanghu'. This dignified shape is a Yixing classic and appears both undecorated and decorated. Pieces decorated with polychrome enamels such as appear on this piece are quite rare. Comparison with other enamel decorated pieces would indicate this to be a quite important 18th century example.

Browse other works by Yixing ware