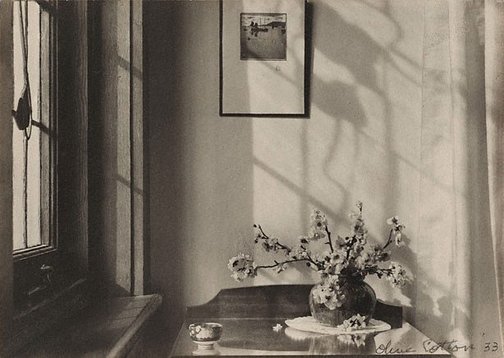 ‘If [my] interest in light and line, form and composition and, a further element of meaning, a feeling, all came together (no matter what the subject) that for me was a moment of great excitement.’ Olive Cotton 1

Olive Cotton developed an interest in photography while at high school and became a member of the Photographic Society of New South Wales. After study at the University of Sydney, she joined the photographic studio of Max Dupain in 1934. While working as Dupain’s assistant, she continued taking her own photographs, eventually receiving international recognition with the inclusion of her work in the London Salon of Photography for 1935 and 1937. During the Second World War, with Dupain away on service, she managed his studio. During the mid 1940s, however, remarried and with a young family, she moved away from Sydney and stopped taking ‘serious’ photographs. She resumed her professional career in 1963. A survey exhibition in 1985 established her as one of the most important photographers of her time.2

Cotton recalled that this photograph was taken at the family home: ‘When we were young my sister Joyce and I shared this room. Its stained-glass windows had a simple floral motif which cast attractive shadows on the wall in the late afternoon.’3 The play of light and shadow, which is such a remarkable feature of this work, recalls Edward Weston’s celebrated image ‘Epilogue’ 1919 which may have been known to Cotton by 1934. Unlike Cotton’s better known images, such as ‘Teacup ballet’ 1935 (AGNSW collection), which use consciously modern techniques of dramatic lighting and distorted vantage points, this image, with its fine tonal contrasts and slightly Japonisme flavour, sits firmly within the pictorialist tradition. The AGNSW has recently acquired a variation of ‘My room’ taken at a different time of day and with darker, intense shadows.