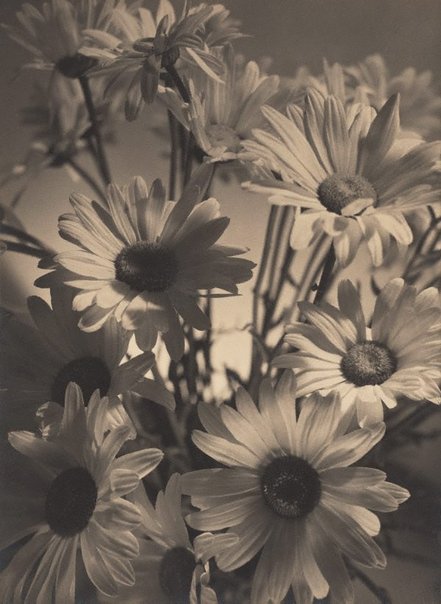 Celebrated Australian photographer Olive Cotton was given her first Box Brownie by her family for her eleventh birthday (1922) and continued to experiment with taking and developing pictures throughout the 1920s. By the early 1930s Cotton had mastered the Pictorialist style so popular at the time and was on her way to establishing her own approach which also incorporated Modernist principles. The recurrent themes of landscape and plant-life are important to the photographer’s approach, which photography scholar Helen Ennis describes as Cotton’s concern for the ‘potential for pattern-making’.

‘Shasta daisies’ is an interesting and rare combination of natural form and a highly-constructed scenario, the flowers having been photographed in Cotton’s studio and carefully arranged for the camera. Cotton, in the 1995 book, wrote of the photograph: ‘I chose to photograph these in the studio because out of doors I would have had less control of the lighting and background. I examined the composition very carefully through the studio camera’s large ground glass focussing screen and – the view from the camera’s position being slightly different to my own – made as many rearrangements to the flowers as seemed necessary. I then used (apart from a background light) one source of light to try and convey a feeling of outdoors.’ ‘Shasta daisies’ is important within Cotton’s oeuvre for uniting her interest in plants in their natural ‘outdoors’ environment with her enquiry into photographic form and space.

Purchased with funds provided by the Photography Collection Benefactors' Program 2013