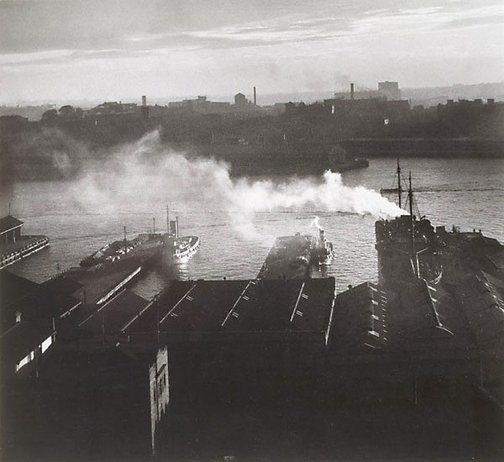 Olive Cotton photographed Darling Harbour during her time as a practicing photographer in Sydney in the 1940s. This was a period of her life which she would later described as ‘really great years’, a reference to the freedom she enjoyed managing Max Dupain’s studio whilst he was at war 1. Darling Harbour was taken from the northern windows of the studio. Cotton reflected, ‘The windows were tall and wide, and from them one had an unbroken view of the Harbour … During the war years I watched the Australian hospital ship Manunda slowly coming into the harbour, unnoticed’ 2. This image captures the light filtered through the smoke of the Manunda, illuminating its ostensibly unnoticed path to anchor.
Cotton grew up in the northern Sydney suburb of Hornsby, the eldest of five children. She was gifted a Kodak No 0 Brownie camera by an aunt at the age of eleven, igniting her life-long passion with photography. Cotton completed a Bachelor of Arts at the University of Sydney with majors in Mathematic and English 1934. She defied her father’s wishes upon graduating and pursued a career in photography joining her childhood friend, Max Dupain’s studio at 24 Bond St, Sydney. Cotton continued to practice photography, alongside working as a teacher, after relocating from Sydney to the rural NSW district of Cowra in 1946 3. Her work has been exhibited extensively during her lifetime and posthumously, notably at the London Salon of Photography in 1935 and 1937 and with major retrospectives at the National Library of Australia and the Art Gallery of NSW in 2000.
1. Ennis, H 2005, ‘Olive Cotton: photographer’, National Library of Australia, Canberra p 7
2. Ennis, H 2005, ‘Olive Cotton: photographer’, National Library of Australia, Canberra p 45
3. Annear J 2015, ‘The photograph and Australia’, Art Gallery of New South Wales, Sydney p 275