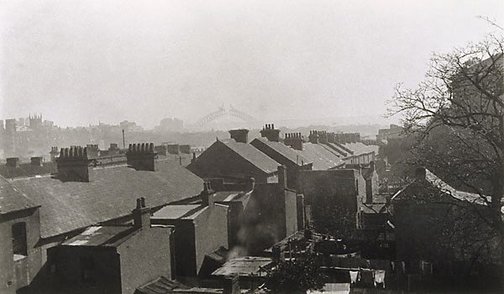 Backyards and chimneypots is one of Olive Cotton’s earlier photographs. Its subject matter represents concerns Cotton shared with Harold Cazneaux who lamented that his generation of Australian photographers neglected the densely populated city as the focus of their work 1. Backyards and chimneypots throws into sharpest relief the human element of the city with tightly-packed terraces dissecting the foreground of the frame. The otherwise grandiose monument of the Harbour Bridge, caught in this more ethereal light, is cast as secondary to the terraces in the foreground. Backyards and chinmeypots exhibits Cotton’s preference for the everyday over the extraordinary; a democratic approach to subject matter which remained an enduring concern of her work 2.
Cotton grew up in the northern Sydney suburb of Hornsby, the eldest of five children. She was gifted a Kodak No 0 Brownie camera by an aunt at the age of eleven, igniting her life-long passion with photography. Cotton completed a Bachelor of Arts at the University of Sydney with majors in Mathematic and English 1934. She defied her father’s wishes upon graduating and pursued a career in photography joining her childhood friend, Max Dupain’s studio at 24 Bond St, Sydney. Cotton continued to practice photography, alongside working as a teacher, after relocating from Sydney to the rural NSW district of Cowra in 1946 3. Her work has been exhibited extensively during her lifetime and posthumously, notably at the London Salon of Photography in 1935 and 1937 and with major retrospectives at the National Library of Australia and the Art Gallery of NSW in 2000.
1. Miller S 2007, ‘Photography: Art Gallery of New South Wales collection handbook’, Art Gallery of New South Wales, Sydney p 82
2. Ennis H 2012, ‘The space of biography: writing on Olive Cotton’, Meanijn vol 71 no 3 p 68
3. Annear J 2015, ‘The photograph and Australia’, Art Gallery of New South Wales, Sydney p 275