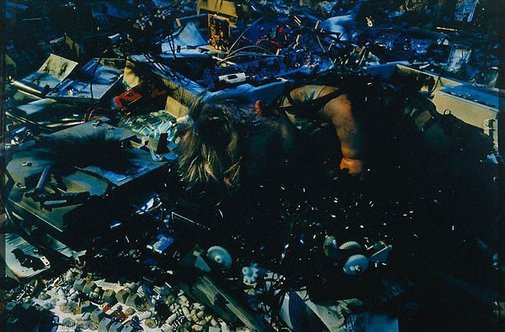 In ‘Untitled’ Cindy Sherman pushes her grotesque–burlesque sensibilities in a temporary move away from the performative images of self-transformation, such as the ‘Untitled film stills’ 1977–80 series, for which the artist is famous. The selected work is part of the Disaster series 1986–89 and typifies the intensifying scenes of constructed monstrosity, destruction and chaos that began to emerge in her macabre ‘Fairy tales’ series of 1985. It also marks Sherman’s growing fascination with integrating fragmented and simulated body parts into her images.

Championed in the 1970s and early 1980s by many feminists as an artist whose work critiques feminine stereotypes and the tropes of the mass media, some read Sherman’s subsequent work, including ‘Untitled’, as a variation on the ‘female grotesque’ and a continuation of the images by the artist that appeared to negotiate the penetrative male gaze.1 Yet such prescriptive readings and ‘ownership’ of the work suggests they may have been the impetus for Sherman’s move away from images of herself or of women, ironically reinstating a personalised aspect to her work by not appearing in them.

An eerie theatrical film-noir lighting adds a chilling dimension of abandonment and vagrancy to this image, as blue shadows pool around the debris. Strewn, torn, smashed, burnt; Sherman spares nothing on the disassembled office equipment and communication devices which fill the image. A doll lies face-down on this trash heap, grimy and stiffly grasping at the tangle of audio tape as if it were the last thread of hope. The face being unreadable, the work suggests annihilation of self and identity by the destruction of any means of connection or communication. As Sherman has commented: ‘Even though I’ve never actively thought of my work as feminist or as a political statement, certainly everything in it was drawn from my observations as a woman in this culture.’2

Browse other works by Cindy Sherman