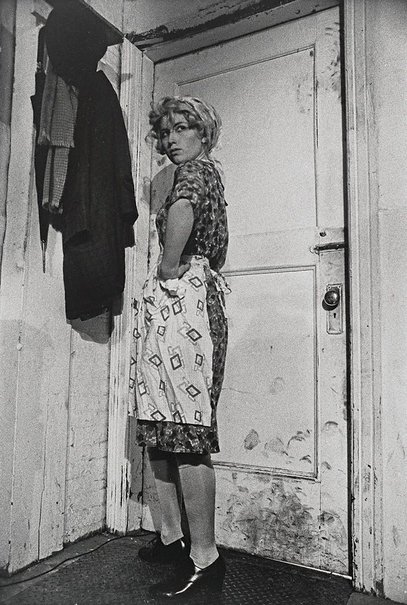 Cindy Sherman’s series ‘Untitled film stills’ took place over a five-year period beginning in 1977 when she was 23 years old. In small black-and-white photographs, she impersonated various female character types from old B-grade movies and film noir. As both performer and director, Sherman investigated the diverse ways in which glamorous mass-mediated images socialise us or discipline us, fool us or placate us. In her single-frame movies she showed moments when desire and reality, personal and collective memory, are merged. Carefully selecting costume, wig, make-up and props, as in ‘Untitled film still #35’, Sherman mobilises a set of informational cues for triggering a daydream or reverie. With clever framing, lighting and composition, the movie fiction of a character is shown in vulnerable solitude. And we get a sense that the character is being watched, that she is the object of someone’s gaze. Since Sherman’s characters are not specified – they seem blank, vacant or absent-minded – we are free to construct our own narratives for these women.

Sherman’s later ‘Untitled film stills’ were in colour and employed rear-screen projection. The change suggested a move to the 1960s and 70s rather than the 1950s, evoking TV rather than the big screen. In this colour series the women seem less like victims or ‘femmes fatales’, more confident and independent. This was followed by a series of what appeared to be centrefolds. By copying mass-mediated modes and genres she subverts them, reversing male and female subject positions, and leaving us unsettled by the ambivalence.

Browse other works by Cindy Sherman