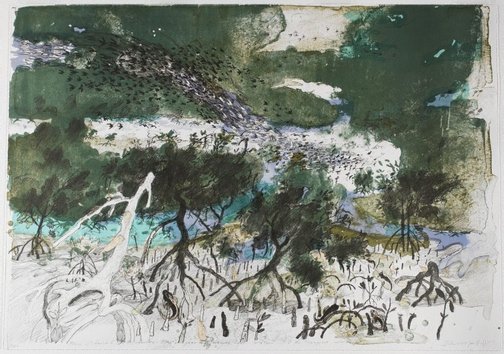 John Wolseley was born in England and studied art in London at the St Martin’s School (1957-58) and Byam Shaw School of Art (1958-60), and printmaking with S W Hayter in Paris in 1961-63. He arrived in Australia in 1976; since this time his art has been concerned with close observation of and immersion in the Australian landscape, and its flora, fauna and geology.

Wolseley favours working on paper, often using collage, and in the last decade made works in the landscape of a more conceptual nature, such as those recently shown at the Gallery in the last Biennale of Sydney, where the bush itself is the executor of the image.

This lithograph was among a number drawn by the artist at the Australian Print Workshop, and editioned there by APW printers, in 2012.

Purchased with funds provided by the Australian Prints, Drawings and Watercolours Benefactors' Fund 2012