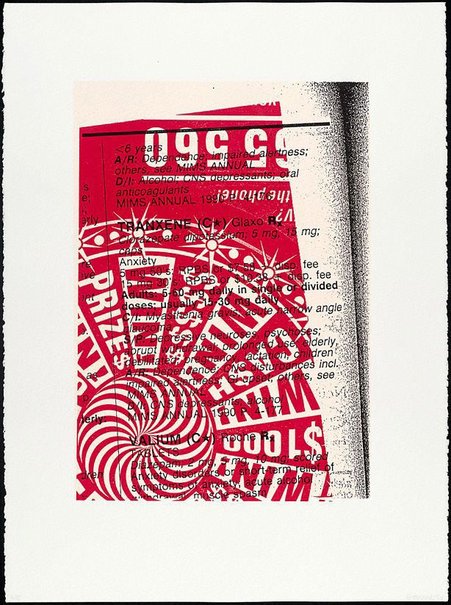 Jeff Gibson, artist and writer, was born in Brisbane in 1958. He studied Visual Arts at the Darling Downs Institute of Advanced Education between 1978-80, and then at Sydney College of the Arts from 1984-85. He has exhibited regularly since 1985 and has lived and worked in New York since 1998.

This print is from a series of five exhibited by the artist at Tolarno Galleries, Melbourne in 1994, immediately preceding the Gallery's 1995 Australian Perspecta exhibition, in which a similar series was exhibited.

In 2005 the artist wrote: "Put simply, I was exploring the poetic dimension arising from simple juxtapositions of recycled fragments within each frame and across the series. The prints were deliberately allusive, yet open-ended. I chose to work for a period of time in a conventional format (the editioned print), as a means of engaging and updating a genre which I believe can serve to mediate between high and low cultural codes."

Gift of Pamela and Hanns Schüttler 2005

Browse other works by Jeff Gibson