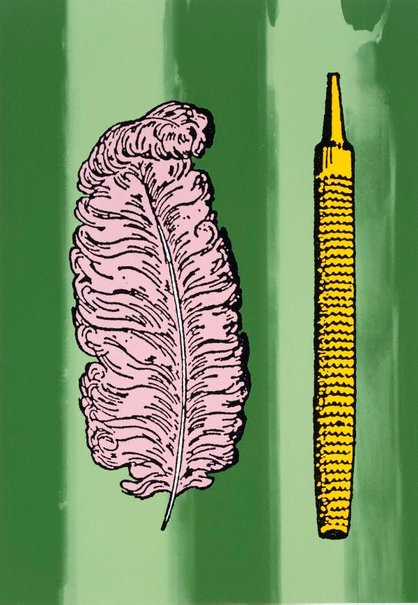 In 1988 ‘pop connoisseur’ Jeff Gibson ran a series of posters around inner-city Sydney entitled ‘Imposter!’ which showed the forlorn artist himself captioned variously as ‘shyster’, ‘charlatan’ and ‘pretender’. The double-take suggested a man playing the fox to his own gun. It puts you in mind of Hany Armanious’ ‘Snake oil’ (in the gallery’s collection). A portrait of the artist as a bald-headed man selling hair-restorer – can we trust contemporary art at all? Isn’t it all made by a bunch of poseurs and mountebanks?

There was a hidden pun in the titling and medium (posters, imposters) and a wincing irony: the sense that Gibson was both making fun of himself and the gratuitous resentment against contemporary art peddled at that time in the press. Later, in 1992, Gibson took potshots at the tyranny of masculinity in his ‘Screwballs’ toilet graffiti series. The images looked like bad cartoons, straight out of the B-track of popular culture, but cleverly retrieved by irony and bold design. The phallus, that symbolic totem of masculinity, was really – the work suggested – just a tin sword. ‘Screwball’ of course is a genre of impossible, nutty comedy, but derived originally from a ball pitched in such a way that it goes in unexpected directions.

Everything in Gibson’s art rests on unpredictable spin and double-dealing. In the media and through-out society you will find duplicity, in-built contradiction and an emptiness between product and pitch. Aren’t we all, by now, just a little bit complicit with mediaspeak (this is rubbish, you know it, and we know it … but oh well, there’s nothing else on)? Don’t we all wear masks?

Stencilled from defunct 1970s men’s magazines, these six bold silkscreen prints of generic male heads were shown in 1997 in an exhibition entitled ‘Legends’.1 The heads were enigmatically accompanied by objects against a standardised striped background (forbidden purple, sublime blue, demonic red). ‘Hugo’ is a cartoon Roman boy juxtaposed with elkhorns; ‘Karloff’ is a vapid Mills and Boon hero with a bottle of Karloff vodka. This iconography of averaged features suggests stereotyped identities stamped out by the social order as if by biscuit cutters. ‘Legends’ included paired (and opposed?) objects that continue the dialogue about masculine/feminine relations in the international sign language of ad copy and do-it-yourself manuals. A yellow file and a pink feather (‘Peking’), a yellow knotted kerchief and a pink cell virus or spiky sea urchin (‘Constantinople’), a yellow leech and a pink screw bolt (‘Batavia’): these pictographs are less like signs at an airport (a picture of an umbrella and a glove with a ‘?’ = lost and found) and more like those Renaissance emblems or printer’s devices that, for example, used a dolphin and an anchor to illustrate the paradoxical adage ‘make haste slowly’.

Browse other works by Jeff Gibson