untitled (winter scene in a village) 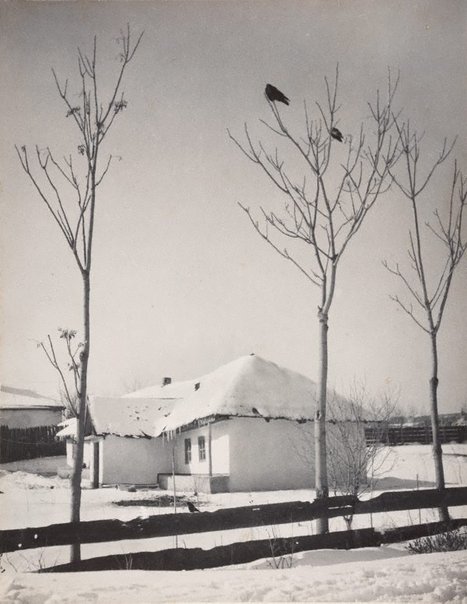 Eastern European photography between the Wars developed in an extraordinary atmosphere of cultural exchange and dialogue that was taking place between the artistic capitals of the continent and cities like Bucharest, Prague and Budapest.

Although born in Romania, an important part of Aurel Abramovici’s creative life was spent in Vienna, which he was forced to leave in 1939 due to escalating anti-Semitic sentiments.1 Prior to this, Abramovici was an active part of the photographic scene: his works were often included in local exhibitions and he enthusiastically participated in exchanges with camera clubs world wide, such as the Sydney Camera Circle.

Very little remains of his photographic legacy, but these two untitled works together with ‘Die Springer’ and ‘Sie schaut zu’, already in the collection of the Gallery, give us an opportunity to evaluate the added dimensions in the work of this talented photographer.

While the two Bauhaus-inspired figurative studies exhibit Abramovici’s concern with modernist ideas regarding form, movement and design, his landscapes are significantly different in their approach. To a degree, these photographs are a continuation of pictorialist photography traditions, also known as ‘salon’ photography. Abramovici’s outlook, however, is unmistakably modernist. Instead of misty, painterly effects, what he successfully seeks out is the poetry in the hard materiality of forms and shapes.

Yet, a sense of romantic nostalgia pervades these landscapes, rendering them timeless. Quiet, graceful and subtle, the rich tones of the photographs evoke a mood of a moment and place. The snow-covered house and the lush mountains surrounding what could be one of the many lakes in Romania are reminiscent of the Balkans. It is not surprising that when the artist’s family emigrated to Brazil after his death in 1961, these were the two photographs they chose to take with them.

Gift of Dr Mariana Minerbo in memory of her father, Aurel Abramovici 2011

© Estate of the Artist

Browse other works by Aurel Abramovici