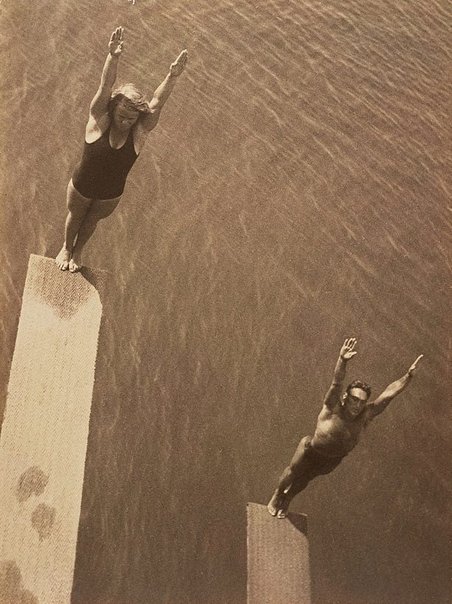 Aurel Abramovici was born in Bucharest and was an active photographer in Romania during the 1930s. Due to the relative isolation of Romania between the wars, the turmoil of the Second World War and subsequent incorporation into the Soviet block, there is minimal research and little published on artists like Abramovici.

However, Abramovici’s work found its way to Australia in the 1930s by means of mail exchanges that occurred at the time. Photography has the advantage of being easily reproducible and highly transportable. Hence mail art was already a factor in the distribution of ideas in photographic pictorialism and modernism. It is a strange precursor to the mail art that flourished between conceptual artists during the 1960s and 1970s, particularly between artists radicalised by the Vietnam War. Harold Cazneaux and Cecil Bostock were actively associated with the Sydney Camera Circle which received the work from Abramovici. This transportability obviously had an effect on the evolution of modernism in Australia.

The relationship between modernism and the nude is a curious one which became embroiled in political propaganda in the 1930s. The classical nude or the muscular worker came to stand for the virtues of socialist revolutions, including National Socialism in Germany. Here Germanic nature-worship and masculine ideals become strangely meshed with tropes of modernity. In Abramovici’s divers we see a classic use of an unusual angle and a dynamic composition that clearly embraces constructivist principles while celebrating the virtues of an athletic body.

© Estate of the Artist

Browse other works by Aurel Abramovici