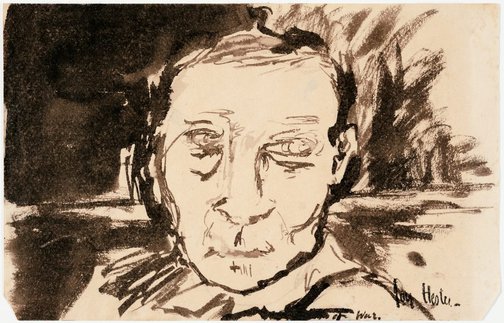 This work comes from a series of drawings made by the artist during and shortly after the Second World War, during her marriage to fellow artist Albert Tucker and about the time her first child, Sweeney, was born in 1945. Tucker had been drafted, briefly and unwillingly, into the army in 1942 and reports of the war, including footage of concentration camps shown in Melbourne, aroused strong passions in Hester – she was acutely aware of the detrimental effects of war, especially the psychological and emotional disturbance on the civilian population. She made a number of portrait drawings about this time, including ' Frightened' (also in the Art Gallery of New South Wales collection), in which the eyes of her subjects have a particular resonance and force.

Browse other works by Joy Hester