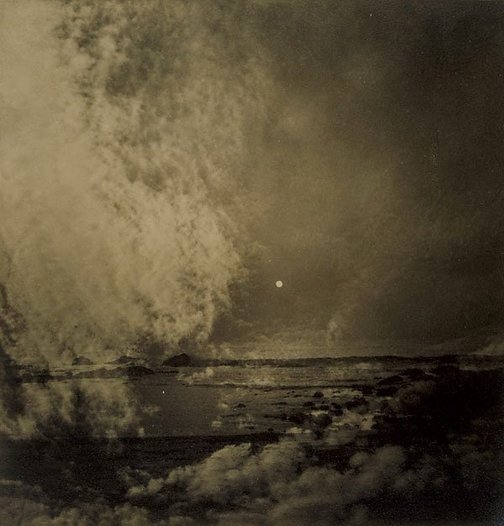 Olive Cotton was a unique artist in the 1930s moving between pictorialist and modernist styles, traditions usually pitted against one another as opposites or embodying competing concerns. In her work Sky Submerged, Cotton adopted a classic pictorialist approach to photography. This is evident in Sky Submerged’s composite qualities and its soft focus 1. Cotton recalls creating this picture saying, ‘I had two negatives, one of an interesting sky and one of the sea. Each seemed incomplete so I combined them until I had a satisfying composition’ 2. Much of Cotton’s landscape photography from the 1930s is set along the Sydney coastline. The breadth of her coastline archive is indicative of her love for nature and, her predilection for spending time at the sea during her childhood and early adulthood.
Cotton grew up in the northern Sydney suburb of Hornsby, the eldest of five children. She was gifted a Kodak No 0 Brownie camera by an aunt at the age of eleven, igniting her life-long passion with photography. Cotton completed a Bachelor of Arts at the University of Sydney with majors in Mathematic and English 1934. She defied her father’s wishes upon graduating and pursued a career in photography joining her childhood friend, Max Dupain’s studio at 24 Bond St, Sydney. Cotton continued to practice photography, alongside working as a teacher, after relocating from Sydney to the rural NSW district of Cowra in 1946 3. Her work has been exhibited extensively during her lifetime and posthumously, notably at the London Salon of Photography in 1935 and 1937 and with major retrospectives at the National Library of Australia and the Art Gallery of NSW in 2000.
1. Ennis H 2000, ‘Olive Cotton’ , Art Gallery of New South Wales, Sydney p 18
2. Ennis H 2005, ‘Olive Cotton: photographer’, National Library of Australia, Canberra p 9
3. Annear J 2015, ‘The photograph and Australia’, Art Gallery of New South Wales, Sydney p 275