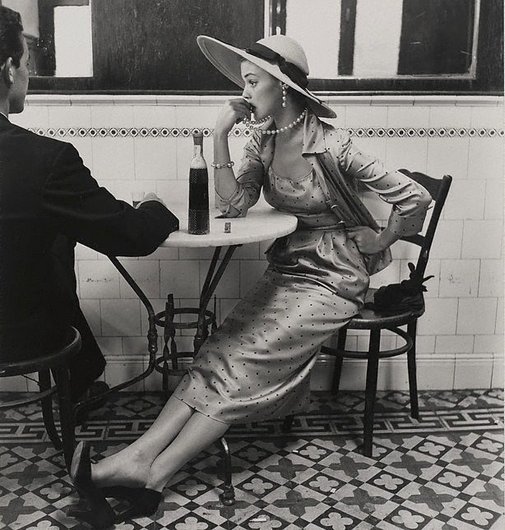 The American Irving Penn brought a new vision to postwar fashion photography, in which simplicity and informality predominated over glamour and gloss. Enjoying a varied career as a fashion photographer, portraitist and photojournalist, Penn started as an assistant at ‘Harper’s Bazaar’ with the legendary art director Alexey Brodovitch in 1937. In 1943 he became the assistant to Alexander Liberman, ‘Vogue’s’ art director, and photographed his first cover – a still-life – for the magazine. His first fashion photograph followed in 1944.

The photograph of model Jean Patchett waiting pensively in a Lima café appeared in the 15 February 1949 issue of ‘Vogue’. It was part of a photo-spread called ‘Flying down to Lima’ which incorporated fashion into a romantic travelogue as lived by the model. This fashion ‘story’ was to be the only one Penn would shoot entirely on location. After this he preferred to work with a simple studio backdrop, as in his landmark photographs of the Paris collections in 1950.

As part of the postwar trend towards showing gritty, real life rather than the lavish fantasies of the pre-war studio, Patchett was photographed with street urchins, in shoeshine stands, massaging her tired feet or killing time in a café. The clothes she modelled were made from ‘Vogue’ patterns, rather than haute couture, and so were attainable for the average woman. Penn photographed everyday fashions in everyday situations, and in him, as Alexander Liberman put it, ‘American fashion and the now liberated American woman had found their photographer’. 1

Browse other works by Irving Penn