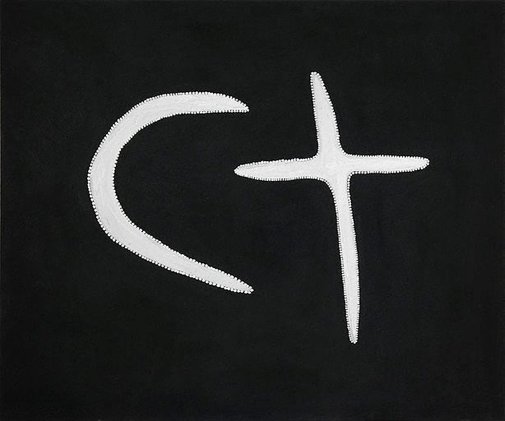 Mabel Juli was born at Five Mile, near Moola Boola Station. She was only a baby when she was taken to Springvale Station where her mother worked. As a child Juli worked on the station, initially in the garden and then later doing domestic duties. She left Springvale with her promised husband when she was quite young and together they moved around the Kimberley, working on various stations including Bedford Downs and Bow River. Juli started painting for the market in the 1980s after watching Rover Thomas and Queenie McKenzie with their work. As Juli states in the DVD 'True Stories: Artists of the East Kimberley' (AGNSW 2002):

'We learn through by that two old people now; old Gurrir Gurrir boss and aunty. That's why we do all them paintings now. But we don't do painting for them. We do our painting, our country. That's for that old people ... I don't get anybody to tell me to do painting, I do my own painting. I know what I can do. I know what I can paint in my country. I picture my country, you know. I know all the place here.'

Juli is one of the leading artists working through Warmun Art Centre where her brother Rusty Peters also works.

The Art Centre documentation for this works states:
This is Yariny Country in Darrajayin (Springvale Station) which lies south of Warmun. This is Mabel's country. In the Ngarranggarni (Dreaming) Garnkiny, the moon was a man. One day Garnkiny came back from hunting kangaroo and saw a girl sitting with her mother. She was very beautiful with long black hair and he fell in love with her instantly. This woman was Dawool, the black-headed snake. She was also Garnkiny's mother in law, and so it was taboo for him to marry her. The people asked him, "who do you want for a wife?" He answered, "doyen, doyen (that one, that one)", pointing to Darwool. But they said "No, she's your mother in law, you must marry one of these promised girls, these nyawana - Dawool's daughters". The people told him "You must go away". Angrily, he left and walked some way before he sat down and turned into hill. He cursed the people, telling them they were going to die, but that he would always live. As the moon he came back to life every month.

Browse other works by Mabel Juli