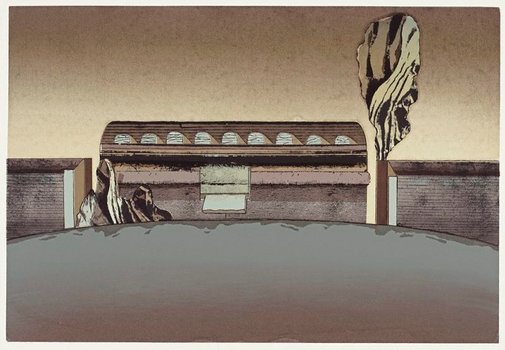 "This comes from a postcard – it was simply of one, two, three buildings – a coloured postcard, a typical postcard of the period, which a lot of people collect these days. So I changed it around because I was interested in the formality, its frontality – there was nothing interesting really, it was very plain … I changed it around completely, changed the three buildings and added that unexpectedness by putting in a plume of tree or smoke. I called it Women’s buildings, University of Oregon, which is a very silly title, but that’s what was on the postcard. It makes no sense in regard to the image when one looks at it, but that’s part of the absurdity, that quirkiness I’m interested in."

unnumbered from edition of 16