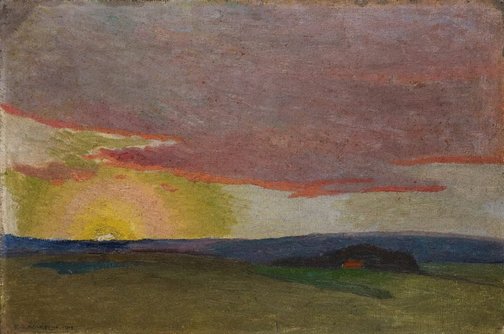 'By exploring the realm of colour we have opened for ourselves new avenues of thought and enlarged our consciousness of the fundamental of life.' Roland Wakelin 1919

Roland Wakelin's sense of the utopian 'unity of harmonious colour' was perhaps first implied in the experimental work 'Narellan' from 1917. This small painting represents a major aesthetic and philosophical leap in Wakelin's practice, the implications of which were paramount in the early developments of Australian modernist painting.

'Narellan' points toward Wakelin's exploration of the metaphysical dimensions of colour abstraction. From around 1917 he began to embrace international currents of developing modernisms, at a time when a new colour consciousness had emerged out of the devastating experiences of World War I. Artists connected colour with notions of harmony and healing and used colour expression to conceptualise non-visible or spiritual realities.

With its colouristic sense of the mystical sublime, 'Narellan' is clearly imprinted with Wakelin's bourgeoning sense of colour as a gateway to the unconscious. He displaces direct references to the representational world using instead areas of saturated, non-naturalistic hues to suggest notions of psychological transcendence. The work signposts Wakelin's early investigations into the sensuous, psychological and spiritual aspects of colour that would culminate in his seminal 'Colour in art' exhibition that he staged with Roy de Maistre in 1919. He would at this time claim that colour invoked the "deepest underlying principles of nature...[and] the spiritual speech of everyday living"; principles he earlier envisaged in the landscape of 'Narellan'.

oil on canvas on plywood

Browse other works by Roland Wakelin 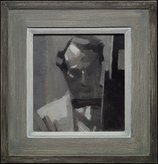 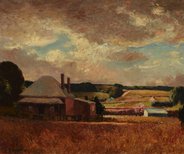