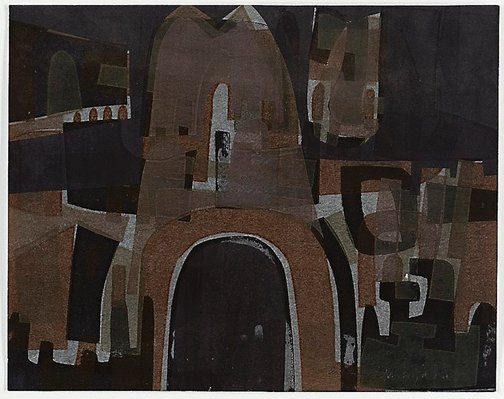 This image was inspired by the architecture of Antoni Gaudí which Senbergs first saw in magazines and books. One of the most original architects of his time, Gaudí has remained a favourite.

"The first time I saw Gaudi was in an Italian architecture magazine. It had photographs – they were in black and white and looked terrifically dramatic. At that time I didn't really know what they were, but I was only interested in the images. I didn't really realize who he was … It was the ventilators and all those sculptural forms, the shapes on the top of the Casa Milà of Gaudi's apartment building in Barcelona. At that time I was always doing those strange tower forms. They just became real objects of interest and of course naturally, later on, I became more curious about him, and by the time I'd been overseas I'd learnt something about him and went and had a look at it. In a vague, indirect way there was some sort of awareness of a Gaudi form when I was doing this print."

unnumbered proof from edition of 10