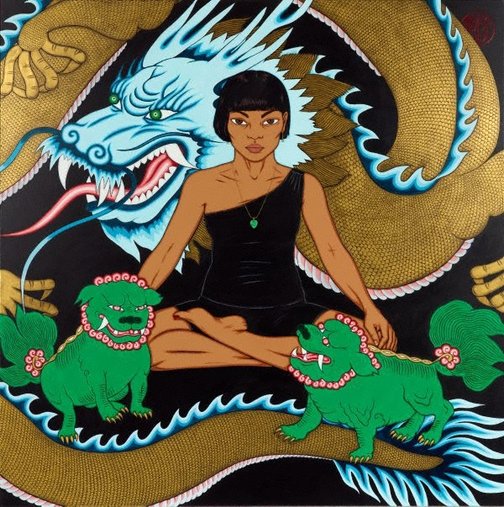 Kate Beynon's work explores the journey she has taken from her birthplace in Kowloon – also known as the City of Nine Dragons – to her life in Australia. Leaving Hong Kong as a young child, she lived in Singapore, Germany and the United Kingdom before arriving in Australia in 1974. As an Australian artist with Chinese-Malaysian and Welsh heritage, Beynon’s work embraces notions of hybrid identities and fluid cross-cultural exchanges.

In 'Self-portrait with guardian spirits' she depicts herself sitting cross-legged in a half lotus position – a Buddhist mediative pose – accompanied by a large golden dragon and twin green lion-dogs. Dragons represent a positive force in both Chinese and Welsh cultures. Fierce, protective and always benevolent, they symbolise strength and good luck. The lion-dogs, or ‘fu dogs’, appear as chunky canines with pink swirly manes, their fangs displayed in flashy grins. As companions and guardians, they bear a resemblance to the artist’s own rescued staffy cross-breed. These hybrid creatures challenge the notion of ‘pure origin’, while also creating a sense of adoration and safe-guarding. The idea of protection is also reflected by the heart-shaped jade pendant worn by the artist, an amulet from her mother. It portrays an interest in auspicious charms and talismans, combined with family connections.