Rainy moon - Kojima Takanori, from the series One hundred aspects of the moon 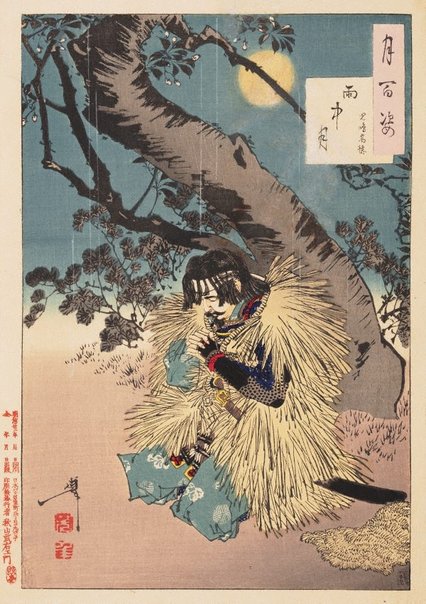 Kojima Takanori (d1358), lord of the Bizen province, was not only known for his bravery but also for his deep knowledge of the Chinese classics. This designs illustrates his famous act of loyalty, which is recorded in the 14th century chronicle 'Taiheiki' (‘Chronicle of the Great Peace’). Takanori led a small group of loyal retainers to rescue Emperor Go-Daigo, who was sent into exile as a result of a power struggle between the court and the military leaders. Takanori lost his way, but eventually found the inn where the emperor was held. Disguised as a peasant, he carved a Chinese poem alluding to the rescue of an ancient Chinese king on the bark of a cherry tree in front of the inn, knowing that only the emperor would understand the underlying message of hope.