Hazy-night moon - Kumasaka, from the series One hundred aspects of the moon 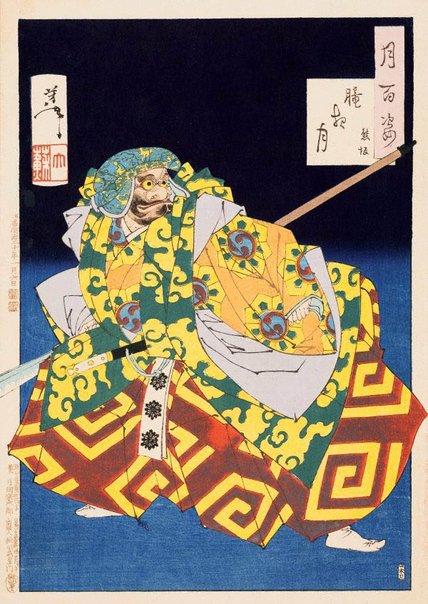 The main figure is a masked nō actor performing the role of Kumasaka no Chōhan, a Buddhist priest who became an outlaw and led a band of robbers. One night in 1174, Kumasaka’s gang robbed a travelling gold merchant, not knowing that the prodigy warrior Minamoto Yoshitsune was in the merchant’s entourage. Kumasaka was defeated and killed. His story was dramatised in the nō play 'Kumasaka'. There is no moon in this design, but audiences familiar with the play would have recognised the reference to a hazy-moon in the title from a chorus line: ‘Though the moon is out, it is a hazy, moonlit night – “Storm in”, he orders …’