Title page and preface, from the series One hundred aspects of the moon 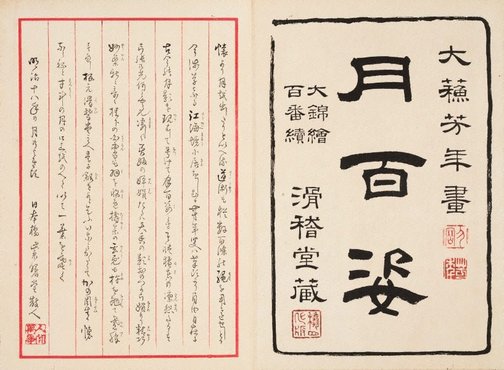 Translation of the preface of bound album by the poet and calligrapher Keikaen Keika (1830–99):

It is said that the Daoist technique for drawing the moon from one’s breast pocket requires several hundred strands of rope. Now Master Yoshitoshi of Asakusa, who resides at a distance from society [literally ‘where the river meets the sea’], has brought forth the lights of the moon past and present from the tip of his brush, employing complete freedom. They are called 'One hundred aspects of the moon'. The crescent light glinting from [the helmet of] of the stoic warrior is fearful; the soft glow surrounding the Lady of Wu spontaneously soothes the Heavenly Steed. The novelty and uniqueness of his detailed and sublime designs are impressive enough to cause the White Phoenix under the Cassia Tree to fold in its wings, and the Dark Hare grinding herbs with its pestle to kick away its mortar.

The owner of the blocks, the Master of the Hall of Humour (Kokkeidō), has asked me to brush a preface. Unable to refuse I hereby cover one page with an address the size of an inch-wide Moon, even though it is by no means on the order of that (produced from the Daoist wizard) Zhou Sheng’s breast pocket.

On a night in Meiji 18 [1885] when the moon is dark, Nihonbashi, Person of Leisure at the Hall of the Purple Dawn (Shishodō Sanjin)

John Stevenson, Yoshitoshi's One hundred aspects of the moon, Seattle, 1992.