Since the crescent moon I have been waiting for tonight - Old man, from the series One hundred aspects of the moon 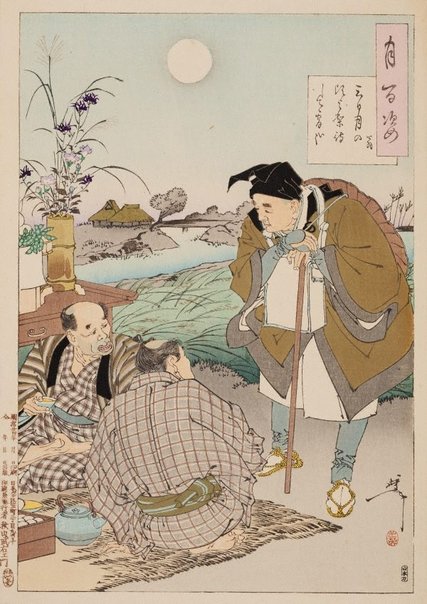 During the mid autumn festival, two farmers are enjoying a picnic under the full moon, when an elderly looking man drops by. Matsuo Bashō (1644–94) Japan’s most celebrated Haiku poet who sometimes referred to himself as 'okina' (old man). His clothing, which he often wore on his travels around Japan, is that of a lay priest. The farmers, with exaggerated and bony faces similar to caricature types in comical prints, are sitting on a straw mat and have gone to much effort for this festival by preparing food and drink. They have even arranged a bamboo vase with bellflowers and suzuki grass, typical flora during the full moon festival of the eighth month.