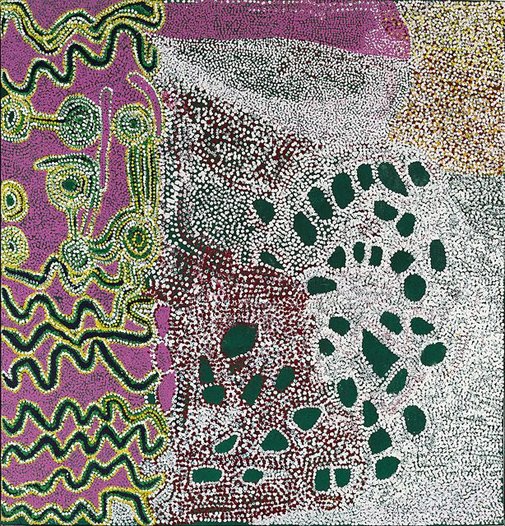 'Wipu Rockhole' 2004 is a significant site in the artist's country. According to documentation from Irrunytju Arts Wipu rockhole "is Watson's Grandfather's country. These are all the rockhole around this area".

This painting demonstrates Watson's characteristic fields of dots depicting the sacred landscape, his country, through planes of colour that meld and intersect. Colour is used with great sensitivity and authority in all his work and this painting is no exception.

'Wipu Rockhole' 2004 is a dramatic image that appears to combine visual depictions of the ancestral activity at the site – the snake-like forms and concentric circles depicted on the left hand side of the canvas – with a cartographic representation of the artist's grandfather's country – black shapes of the rockholes – on the right.

Documentation for the Irrunytju Fundraising Art Auction held in August 2003 at Cromwell's Auction House in Sydney states:
"Tommy Watson was born at Anamarapiti, a homeland 44 kms west of the present day community of Irrunytju, sometime around 1935. He travelled in the bush with his parents. He learnt about hunting and respecting country from his father. With these skills he set out on his own, living like his father taught him".

In the same document Tommy Watson says: "Our paintings are our memories for the future relatives. If they come into the centre, they can see the canvasses that their parents or grandparents did, so they can think about their history, see what their relatives did, what they painted".

Irrunytju Arts is located in Western Australia 720 kms south-east of Alice Springs, in the Ngaagyatjarra / Pitjantjatjara lands. This new art community exhibited for the first time in 2001. Their vibrant and colourful works have since received much attention from private and public collectors. Tommy Watson has emerged as one of the key artists and this reflects his status in the community as a senior Law man and cultural custodian.

Purchased with funds provided by the Aboriginal Collection Benefactors' Group 2004

Browse other works by Tommy Watson