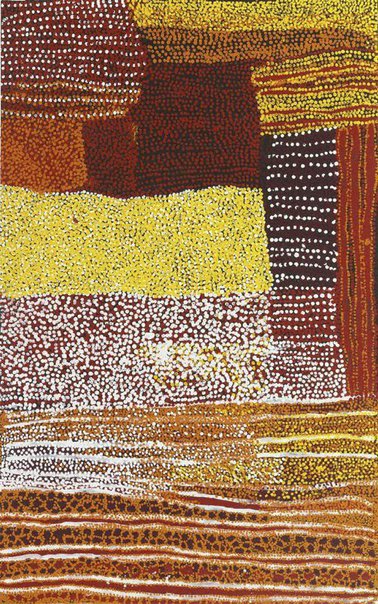 Watson's mastery of dotting techniques is evident in the undercurrent of dark, blood-red dots that lay the ground for dotted fields in ascending shades of red, orange, yellow and white. Colour is used with great sensitivity and authority in all his work and this painting is no exception. 'Walpu' 2004 also displays Watson's rare use of line. Unusually, in this painting, Watson has strengthened his composition with horizontal red and white bands in the lower section of the canvas and several vertical red lines on the right hand side.

In documentation from Irrunytju Arts, Watson states:
"I want to paint these stories so that others can learn and understand about our culture and country.
Our paintings are our memories for the future relatives. If they come into the centre, they can see the canvasses that their parents or grandparents did, so they can think about their history, see what their relatives did, what they painted."

Tommy Watson was born at Anmarapiti, a homeland 44 kilometres west of the present day community of Irrunytju sometime around 1935. He travelled to the bush with his parents. He learnt about hunting and respecting country from his father. With these skills he set out on his own living like his father taught him.

Watson began painting in 2002 following the establishment of the community art centre at Irrunytju by senior women of the community. His work was first exhibited in 2002 in Wati tjilpiku tjukurrpa (Senior men’s stories) at the Aboriginal and Pacific Gallery in Sydney and in Desert Mob at Araluen Art Centre in Alice Springs. Watson was selected for the Telstra National Aboriginal and Torres Strait Islander Art Award in 2002 and 2003 and is represented in the collections of the National Gallery of Australia and the National Gallery of Victoria. Tommy Watson is one of eight Aboriginal artists who have been selected to have their work permanently featured as part of the architectural detail of the new Musée du Quai Branley in Paris which will open its doors in 2006.

Browse other works by Tommy Watson 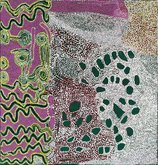