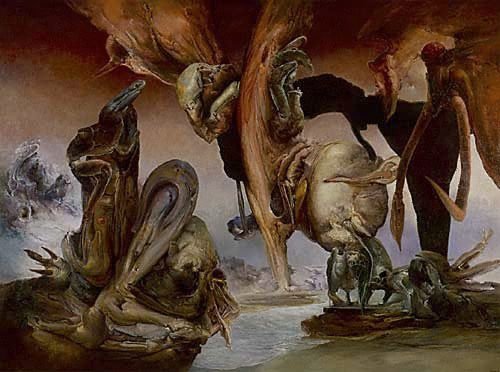 'Lapsed shadows recycled to a capable coast' and 'The arrival of implacable gifts' are two of a group of large-scale paintings that James Gleeson began making in 1983, emerging from a body of drawings he had commenced the previous decade. They are a summation of the ideas Gleeson has been concerned with in his career as an artist, where the strange, underlying organism of the landscape and the powerful force of the subconscious are brought into play with his exploration of mythic and literary sources:

"The forms develop out of the quasi-automatic movement of the charcoal. Sometimes I open up the drawing even more to chance by adding to it - more or less at random, though no doubt guided by an aesthetic instinct - a collage of fragments taken from a wide range of natural forms. Sometimes two or more quite disparate drawings have been put together to form a single image. At this stage I have attached no meaning to the image thus formed.
During the course of painting - from the drawing - I begin to sense a mood, or pick up a suggestion, or detect a relationship which leads me to a title for the finished work. It is never arrived at through analysis, but is more like a verbal equivalent for the visible image that has formed on the canvas. It is not the source from which the image developed, it is a subjective response to a visual fait accompli."
- James Gleeson 1987

Barry Pearce., Older Australian masters: an exhibition of works by major Australian artists executed in the later years of their careers, 'Preface', Sydney, 1991, (colour illus.). not paginated, no catalogue numbers