A calling card, from the series In my father's house 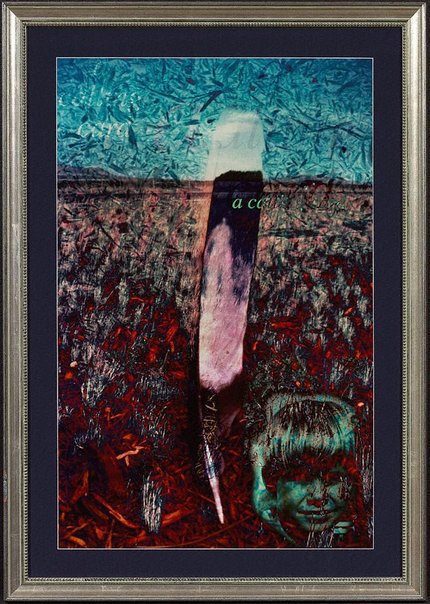 'In My Father's House' is a memorial not only to my father and brother but a memorial to all those children stolen from their families and denied knowledge of their heritage. This work is about chasing and catching those memories as they fall.' Brenda L. Croft, 1998

Croft began working on the series 'In My Father's House' during a residency at the Greene Street Studios in New York in 1996-97 and later at the Western Australian Academy of Performing Arts (WAAPA), Edith Cowan University in 1998, exhibiting the work at the Australian Centre for Photography in 1998. In this series, Croft juxtaposes religious imagery, language and family photos to comment on her experience of growing up in the suburbs with a white mother and an Aboriginal father who was taken from his family at less than two years of age under the government policy that allowed the removal of Aboriginal children from their parents. Growing up in institutions, often with religious affiliations, with little or no knowledge of their parents and culture, these children are now known as the 'Stolen Generations'.
The constructed layers of memory in Croft's work reflect the fragmented lives of these children and the ongoing effects of this through generations as families reconnect. In this process memories become distorted and disparate elements inform one's sense of self, while questioning the validity of one's thoughts.