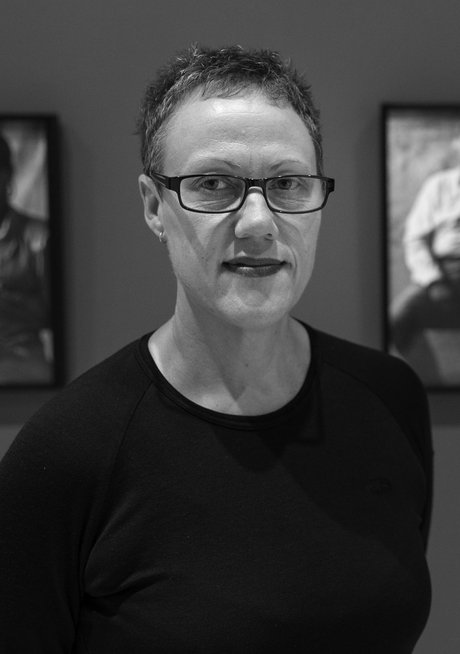 Brenda L. Croft works closely with family, friends and Indigenous community members in Sydney to create her images. In both Noel Collett and Shane Phillips, Eveleigh Street, Redfern, 1992, and Mary Mumbulla and Murri Craigie, 1993, the subjects look straight at the camera and at the viewer, directly and candidly returning our gaze.

Noel Collett and Shane Phillips, Eveleigh Street, Redfern was originally part of a collaborative work entitled Conference Call, 1992, made with internationally renowned African-American artist and activist Adrian Piper and exhibited at the Art Gallery of New South Wales, Sydney, in the 1992 Biennale of Sydney. Croft’s photographs were taken in Redfern, Sydney, and Collett and Phillips stand at the top of Eveleigh Street wearing the jerseys of the Redfern All Blacks, the rugby league team that is a source of local pride. Contrary to the usual media depictions of this area, Croft presents a positive image of urban Indigenous communities in her strongly individual photographs of people and place, taken from an insider’s viewpoint.

Mary Mumbulla and Murri Craigie is from The Big Deal is Black, 1993, a series of photographs of Aboriginal women and their families, taken at their homes. The personal becomes political both in the intimacy of the photographer’s relationship with the families, and the strong and confident sense of self-imaging in these works. While Croft does not appear in these photographs, in depicting networks of her family and friends she has created a form of self-portrait. The Big Deal is Black was first exhibited at the Australian Centre for Photography, Sydney, accompanied by audiotapes in which the subjects discussed the personal and collective memories that had shaped their lives.

Since 1998, Croft has worked with digital media to create images that layer photographs and text, exploring more directly autobiographical subject matter. History and personal memory intersect in the series ‘In my mother’s garden’, 1998, and ‘In My Father’s House’, 1998, which use family snapshots, religious and other imagery and language to consider Croft’s experience of growing up in the suburbs with a white mother and an Aboriginal father who was stolen from his parents at the age of two under the government policy that allowed for the removal of Indigenous children from their families.

Croft wrote in the Biennale of Sydney catalogue: ‘By placing myself behind the camera I am taking control of my self image and images of ourselves. I cannot, do not, take sole responsibility but challenge and attempt to reverse the expected.’

Other works by Brenda L Croft