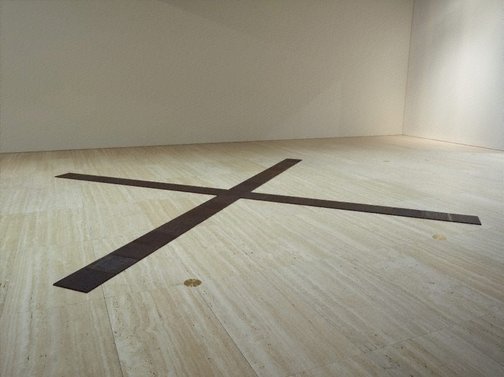 During the 1960s and 1970s, Carl Andre produced a number of sculptures which are now counted as among the most innovative of his generation. Along with figures such as Donald Judd, Sol LeWitt, Dan Flavin, Eva Hesse and Robert Morris, Andre played a central role in defining the nature of Minimal Art. His most significant contribution was to distance sculpture from processes of carving, modelling, or constructing, and to make works that simply involved sorting and placing. Before him, few had imagined that sculpture could consist of ordinary, factory-finished raw materials, arranged into straightforward configurations and set directly on the ground.

Andre nearly always works in a grid, with the dimensions of his finished works determined by multiples of a basic module – such as a brick, metal plate or house beam. The shape of each work depends entirely on the number and configuration of modules. The works are often laid out on the floor like carpet and can in fact be walked on. Although not site-specific, the works emphasise and respond to the planes of the space they occupy. While the minimalist use of industrial materials on a grand scale is often regarded as overtly masculine and assertive, Andre’s work, in contrast, is modest and quietly poetic.

Gift of the John Kaldor Family Collection 2011. Donated through the Australian Government's Cultural

Browse other works by Carl Andre