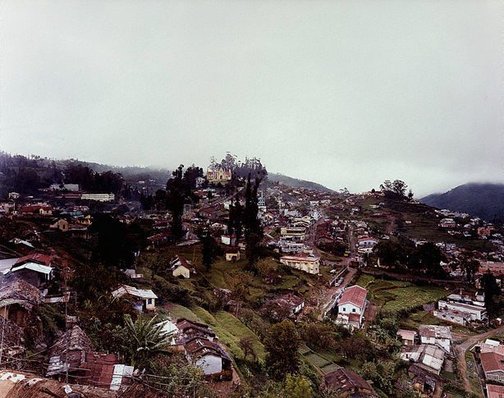 Gerhard Stromberg’s approach to photography is poetic and contemplative. In the tradition of the German Romantics, he considers the unresolved relationship between the individual and nature, an attachment loaded with aesthetic and lyrical possibilities. Yet his images are also characterised by an emotional detachment which, like his teachers Bernd and Hilla Becher, documents what is before him without recourse to prosaic or allegorical notions. While his work is associated with the conceptual practices emanating from Germany and evidenced in the work of his peers, including Andreas Gursky and Thomas Ruff, Stromberg’s methodology belongs more to a tradition of topographic practice.

Since moving to London in 1986 Stromberg has repeatedly photographed the landscape. Kodaikanal is a small former British hill station in the Nilgiri Hills, Southern India, which Stromberg visited in 1992 because his grandfather had lived in India in the 1950s and the stories he had been told as a child still held particular sway. The view over the town was shown to him by the local tailor. Stromberg spent all day waiting for the light to change and clouds to lift so he could see the Roman Catholic Church on the distant hill before exposing one negative. He did not print the negative until years later, because at that point he was attempting to condense the world into simplified structures photographically. As with most of Stromberg’s images, the human figure appears absent, although the impact of human activity is present and the print is distinguished by its clarity and vast detail. The thick blanket of fog over the mountains, and the zigzag patterning of countryside with urban development, reveal the lush and unbounded variation of nature and humanity – interwoven with history within one frame.

Browse other works by Gerhard Stromberg