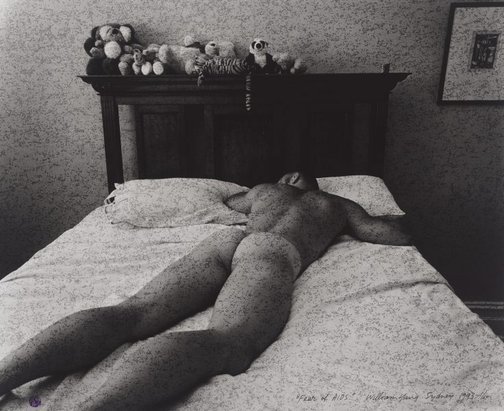 William Yang considers himself ‘a documentarian, a diarist mainly, as it is my own personal stories that my work comes out of, from my own life’.1 His ‘stories’ synthesise his experiences and tell of his identity, his childhood and family history, friendships, the impact of AIDS and death. Yang was born in North Queensland, a third generation Chinese-Australian. He moved to Sydney in the late 1960s and commenced work as a freelance photographer in 1974, taking social photographs and documenting the then less visible gay community in Sydney. In the process he assembled a remarkable archive from the 1970s and 1980s. His first solo exhibition in 1977 presented a frank depiction of the Sydney party scene. Since 1989 he has developed a series of monologues with slide projections which draw on his collections of photographs and experiences and have become the focus of his work. These include ‘Sadness’, ‘Blood links’ and ‘The North’ which have toured extensively. Of his practice, Yang has observed: ‘I don’t think I have a great technical attitude but I am interested in people.’2

‘Fear of AIDS’ is from a body of work which was exhibited under the title ‘Friends of Dorothy’; the title of the fifth in his series of performances, a personalised social history of the gay community in Sydney. In interviews Yang has remarked on how in his work he tries to approach things as honestly as he can and how that process can lead to a peeling back of social attitudes. ‘Fear of AIDS’ takes as its subject sex and male desire. Characteristically, he presents a straightforward point of view, however while this image is not literally written on, as many of his other photographs are from this time, the surface is inscribed with an abstract pattern affecting the overall surface and posing a wider social question: ‘How do you view this?’