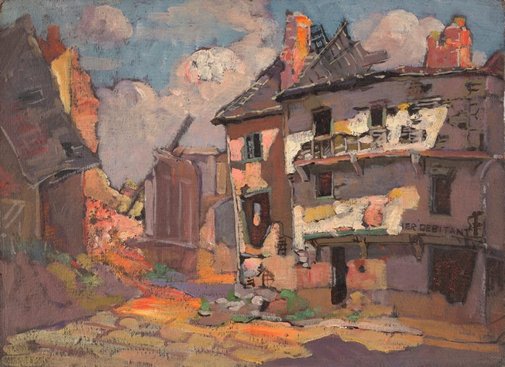 Eveyln Chapman trained in Sydney under the Italian-born artist Antonio Dattilo-Rubbo, together with fellow students Grace Cossington Smith and Norah Simpson. She moved to Europe with her family in 1911 and attended the Académie Julian in Paris, gaining a classical training in life drawing. When war broke out in 1914, the family moved to London and Chapman spent time in St Ives, Cornwell, a thriving cosmopolitan colony for artists from around the world. She began painting vivid works in tempera and oil, which evidence her assimilation of French post-impressionist techniques.

In this work, Chapman depicts the remains of what was a glassblowing workshop - 'Verrier débitant' - seen in historical photographs in the Evelyn Chapman Archive. Vivid oranges and yellows recall the hot molten glow which would have emanated from the windows, before a bomb devastated the building.