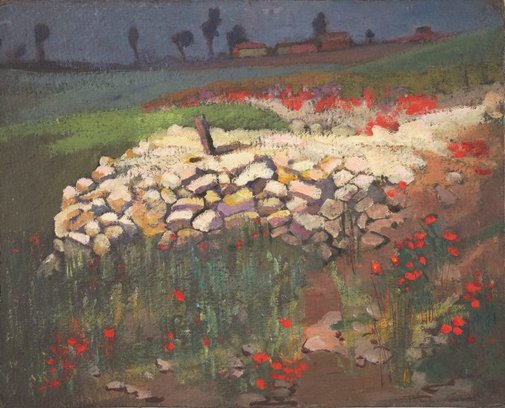 Eveyln Chapman trained in Sydney under the Italian-born artist Antonio Dattilo-Rubbo, together with fellow students Grace Cossington Smith and Norah Simpson. She moved to Europe with her family in 1911 and attended the Académie Julian in Paris, gaining a classical training in life drawing. When war broke out in 1914, the family moved to London and Chapman spent time in St Ives, Cornwell, a thriving cosmopolitan colony for artists from around the world. She began painting vivid works in tempera and oil, which evidence her assimilation of French post-impressionist techniques.

This small study relates to a larger work in the Gallery's collection, 'Old trench, French battlefield', in which Chapman suggests the resilience and rejuvenation of the landscape. Despite the violent past of the ruined trench, the artist imbues a sense of optimism into the work, with its sunlit vista dotted with brilliant red poppies, thereby evoking hope, regeneration and life in a post-war world.

oil?/gouache? on grey card on board