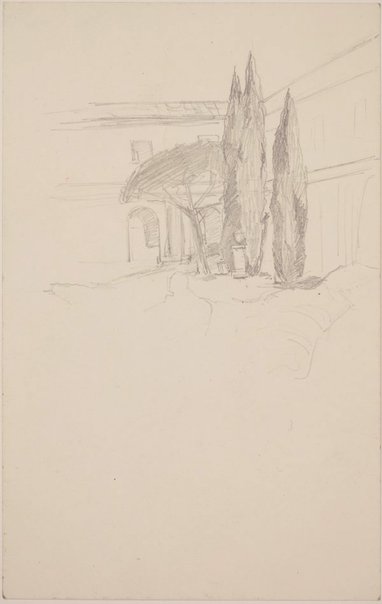 'Italy' was one of three paintings made in 1951 shortly after Gleeson's return from Europe. The other two were 'Spain' and 'Greece'. Of these countries, he had only visited Italy, for three months in the summer of 1948.

"I was so powerfully drawn to the Mediterranean world - a fascination which showed up in these paintings ... No one visiting Europe for the first time just after the Second World War could ignore the devastation that was the War's legacy and the accompanying sense of loss was most poignant when it focussed on places and things which have enshrined the essence of past times...", Gleeson quoted in Renee Free's unpublished working catalogue of James Gleeson's work.

There is an oil study for 'Italy' in the Gallery's collection. Frank O'Keefe, Gleeson's partner who he first met in 1948, modelled for the male figures in this painting and for a number of other paintings including 'The crucifixion' 1952 and 'Crater with revenant' 1966.