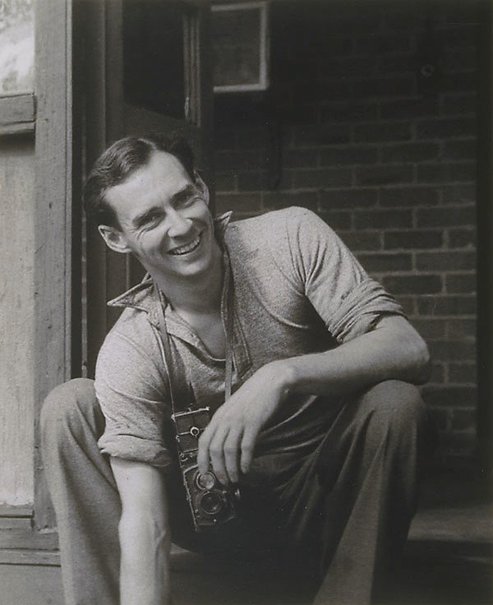 Cotton shot this portrait of fellow Australian photographer, Max Dupain during their brief marriage at their home in Longueville on Sydney’s lower north shore. Dupain is captured affectionately in the portrait, represented as at once casual through pose and, as industrious on account of his rolled up sleeves and the Rolleiflex TLR camera which hangs from his neck. It is indicative of the combination of a working and personal relationship Cotton and Dupain shared during the late 1930s when they operated a commercial studio together. The couple separated in 1941 but Cotton went on to manage the Dupain Studio while Max was away serving as a camouflage officer during the Second World War 1.
Cotton grew up in the northern Sydney suburb of Hornsby, the eldest of five children. She was gifted a Kodak No 0 Brownie camera by an aunt at the age of eleven, igniting her life-long passion with photography. Cotton completed a Bachelor of Arts at the University of Sydney with majors in Mathematic and English 1934. She defied her father’s wishes upon graduating and pursued a career in photography joining her childhood friend, Max Dupain’s studio at 24 Bond St, Sydney. Cotton continued to practice photography, alongside working as a teacher, after relocating from Sydney to the rural NSW district of Cowra in 1946 2. Her work has been exhibited extensively during her lifetime and posthumously, notably at the London Salon of Photography in 1935 and 1937 and with major retrospectives at the National Library of Australia and the Art Gallery of NSW in 2000.
1. Ennis H 2005, ‘Olive Cotton: photographer’, National Library of Australia, p 6
2. Annear J 2015, ‘The photograph and Australia’, Art Gallery of New South Wales, Sydney p 275