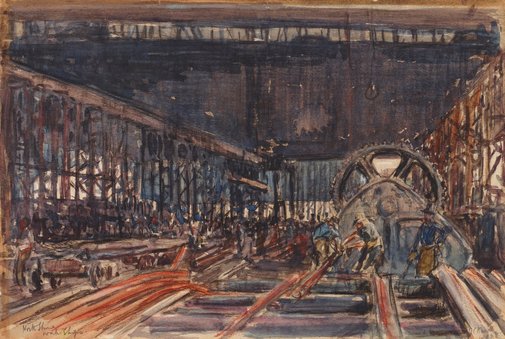 The building of the Sydney Harbour Bridge in the 1920s and 1930s was a major international engineering achievement, and a social and cultural milestone for modern Sydney.

Melbourne artist Jessie Traill made regular trips to Sydney between 1928 and 1932 to observe the construction of the bridge, producing an iconic series of etchings on the subject, the Sydney Bridge series (1927-1931). This dense and rapidly executed watercolour depicts the workshops that serviced the construction of the bridge, witnessed by the artist directly and painted on-site. It presents a scene of industrial ambition and hard labour - a counterpoint to contemporary images of Australian prosperity that tended to emphasise Australia’s strength as an agricultural powerhouse.

In 1929 Traill wrote:
What we see is a solid mass of concrete and intricate lacework of iron made more intricate by the play of light and shade; something that giants might play with as a child would with his Meccano set… In years to come when we dash over the bridge in our taxi or take a ‘walk’ across… to see our Harbour, we, who have watched it progress and sketched or photographed its parts, will feel with these workmen a sort of pride of possession, and it will be OUR BRIDGE too. (reference: Industry and nature, the etchings of Jessie Traill QAG, 1989, p.8)