Down under, Newcastle upon Tyne 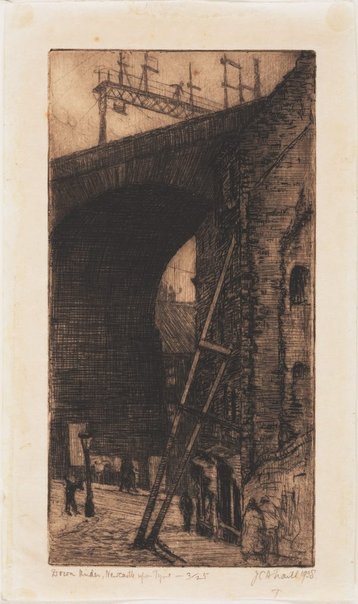 Jessie Traill is among the most celebrated Australian etchers of the early 20th century. She studied at the National Gallery School in Melbourne and from 1907-09 in London under Frank Brangwyn, whose choice of industrial subjects and etching style was a great influence on her.

She exhibited etchings from 1908, with subjects ranging from urban and industrial to pastoral, and won international prizes for her prints. She was a member of the influential Australian Painter-Etchers' Society following her return to Australia in 1920; this etching was exhibited in their 1938 annual exhibition in Sydney.

Traill moved to England in 1937 and remained there for the duration of World War II. While she was not directly occupied with the war effort, her etchings from that period reflected the times, with several images of the industrial ship-building city of Newcastle upon Tyne.

etching, aquatint, printed in black ink with plate tone from one plate, on cream wove paper

Jessie Traill
Down under, Newcastle upon Tyne