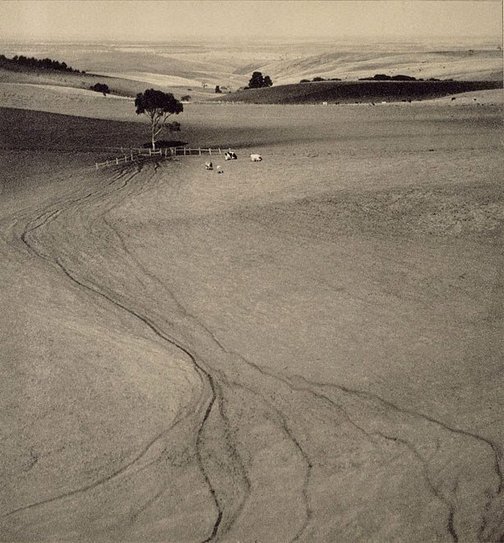 John Bertram Eaton was born in England and migrated to Australia with his family eight years later. His father ran a small gallery and framing shop in Melbourne, where Eaton began work. In the early 1920s his photographs were included in local and international exhibitions and in 1921 he joined the Victorian Pictorial Workers Society. Four years later he held a solo exhibition of 124 photographs, nearly all of them landscapes. At this time Cazneaux called him ‘a fairly new man amongst the Pictorialists of today’.1 He became a foundation member of the Melbourne Camera Club and remained a prolific exhibitor into the late 1940s.

Jack Cato called Eaton ‘the Poet of the Australian landscape’.2 Among his contemporaries he was considered one of the most gifted interpreters of the landscape. When this photograph was exhibited at the Victorian Salon in 1936, the reviewer claimed that it already was a ‘picture too well known to need description’.3 Eaton’s reputation as an interpreter of the Australian landscape extended overseas, with one English reviewer noting, ‘when it comes to Australian landscape, we in England regard John B Eaton as its interpreter’.4 Like the painter Elioth Gruner, Eaton frequently depicts wide, expansive landscapes, denuded of trees, with low receding hills in the distance. He was very skilled at rendering atmosphere and it was probably his aerial, rather than linear, perspective – that sense of distance given by atmosphere which seems to veil and lighten certain parts of the landscape – which appealed so strongly to his admirers here and overseas.

Browse other works by John B. Eaton