John B Eaton settled in Melbourne with his family in 1889. He became involved with photography before 1919 when he began to exhibit in local exhibitions and from 1923 he was exhibiting with the Royal Photographic Society and the London Salon. In 1921 Eaton joined the Victorian Pictorial Workers Society (a sister organization to the Sydney Camera Circle). Eaton was a prolific exhibitor until the 1940s, his style slowly becoming flatter and more graphic. Known primarily as a landscape photographer, Eaton also photographed still lifes.

In 1925, Harold Cazneaux praised Eaton's solo exhibition at Harringtons' Salon, Sydney for its poetry and technique.

Browse other works by John B. Eaton 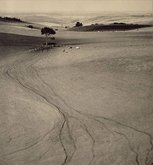